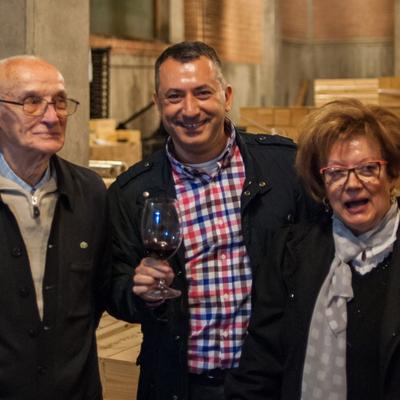 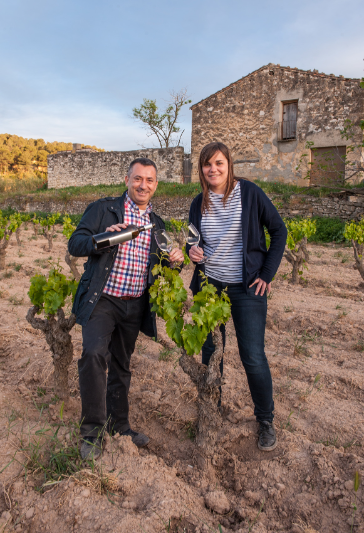 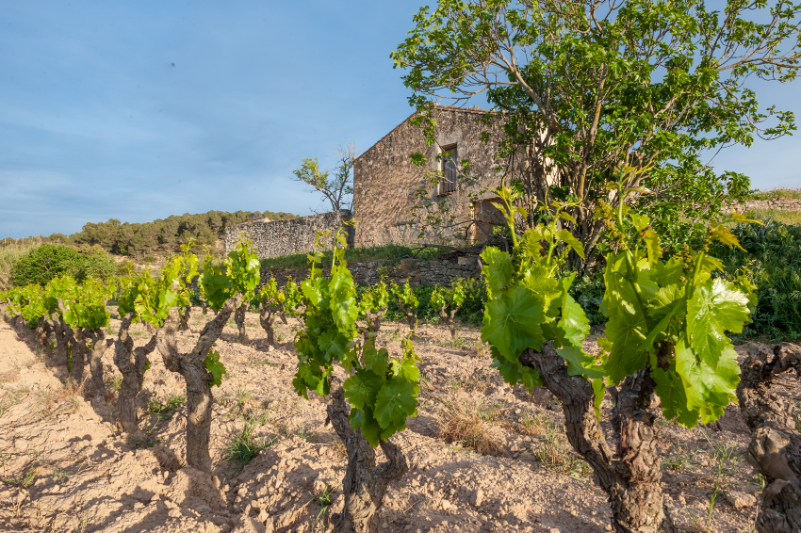 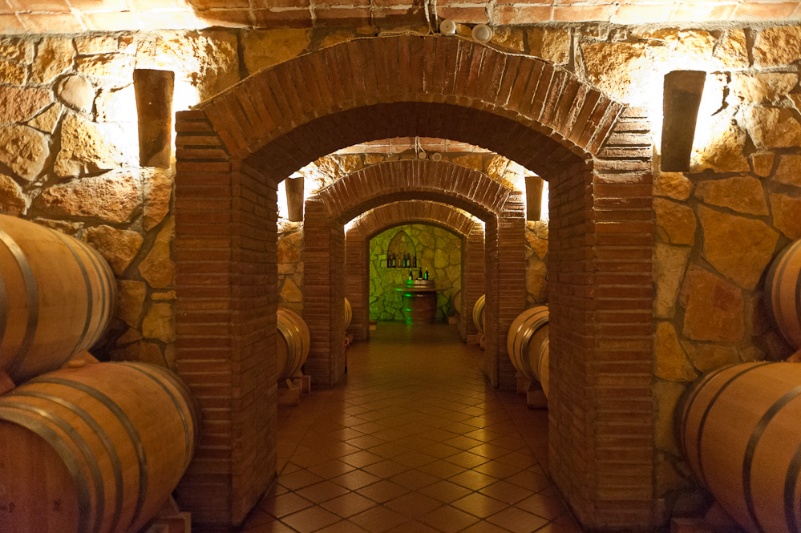 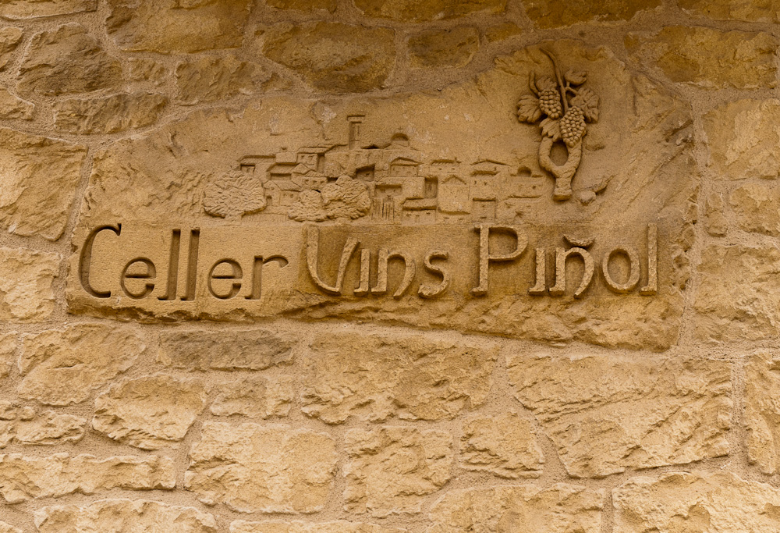 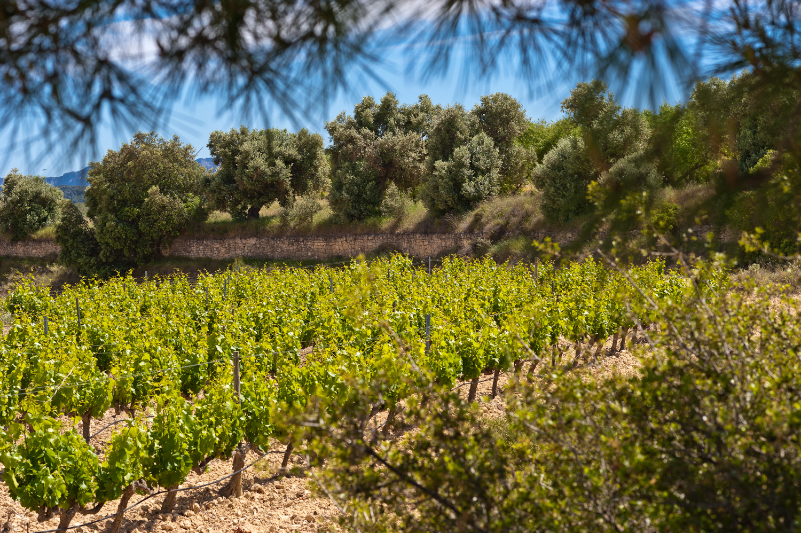 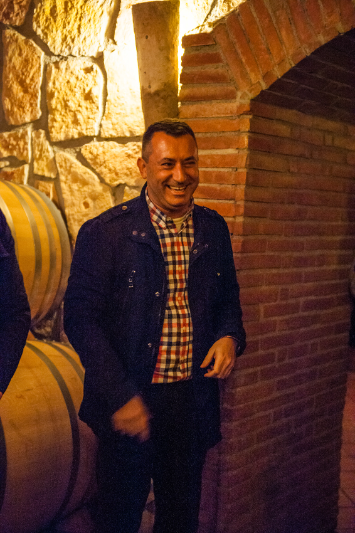 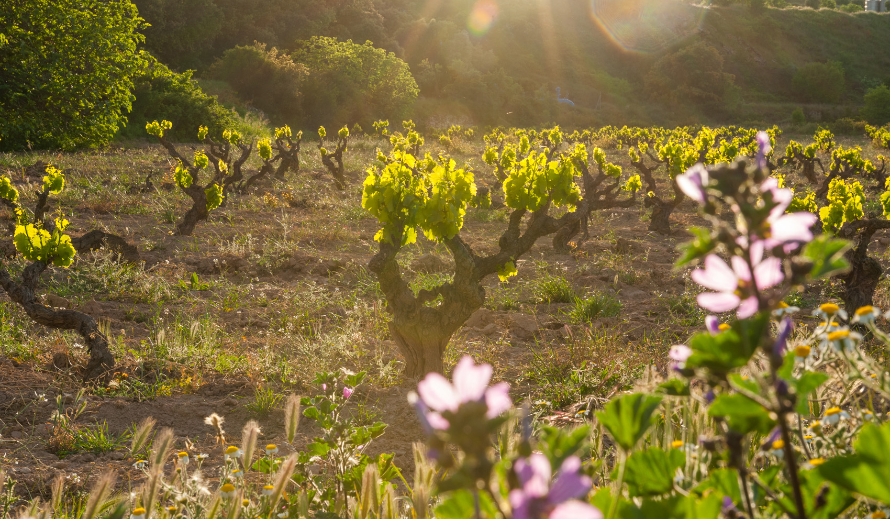 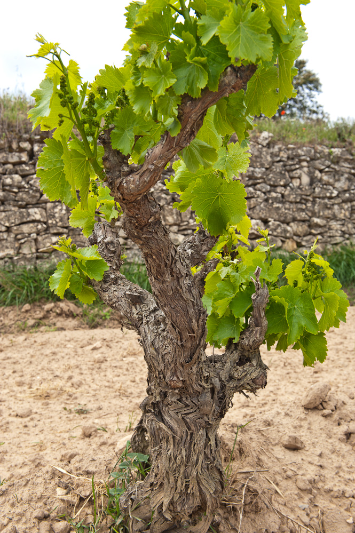 At Celler Piñol, the connections to the land via organic farming, commitment to indigenous grapes, and the involvement of the entire family are the pillars that support every bottle of wine they produce. Generations of the Piñol family have made wine on their estate in Terra Alta, a Mediterranean “hidden gem” wine region in the Catalan highlands of Tarragona. Since the early 20th century, an inherited passion for wine has allowed “Piñol” to be synonymous with “pioneer” in Terra Alta’s fine winemaking tradition. As Josefina often says: “Celler Piñol: four generations of love and passion for the land in every bottle!”

The Piñol winemaking story begins with the great-grandfather Arrufí, who made wine for home consumption from vineyards around the village of Batea. When his daughter, Teresina, married Juan Piñol, the family’s adventures in winemaking grew in earnest, with Juan and Teresina leading the cellar from the 1940s until the 1990s. At 104 years old as of the 2021 harvest, Juan has always been a fixture at the winery—and always smartly dressed as he fulfills his “quality control” tasting duties!  When Teresina passed, her daughter Josefina (along with husband Josep) insisted on not only continuing the cellar but growing it; her bold efforts saved Celler Piñol from extinction during an era of co-ops and internationalization and brought the winery into the fine wine trade. Under Josefina’s sharp business management, Celler Piñol released its first commercial vintage in 1995: 2000 bottles of L’Avi Arrufí Blanc, a 100% Garnacha Blanca. The family’s fourth generation, Josefina’s son Juanjo, joined the business in 2000 after leaving behind a career in chemical engineering—although he leans on this experience as a member of the winemaking team. While taking sommelier courses, Juanjo met the famed wine consultant Toni Coca, who has worked around northeastern Spain for three decades, and has consulted for Celler Piñol since 2007. The full-time winemaker at Celler Piñol is another dynamic, passionate young woman: Cristina Borrull, who joined the winery in 2018. With a strong winemaking team leading the daily cellar operations, Juanjo can place his boundless energy into his primary role as export manager: sharing Piñol wines with trade and consumers as he travels around the world.

Celler Piñol is located in the village of Batea (about two hours southwest of Barcelona) and on the border with Priorat and Aragón, which is the ancestral home of all Garnacha variations. Terra Alta is the one of the highest, driest, and sunniest part of Catalonia, part of a unique microclimate courtesy of the mountainous border of Aragón to the west, the enormous Ebro River bringing cold, dry air from as far north as Rioja, and the moderating Mediterranean Sea in the distance to the east. Terra Alta is known for its cold winters and later harvest, and the gentle snowmelt here kick-starts the spring and summer growing season, making it easier to farm with little irrigation. Additionally, the limestone-rich soils are deeper and more homogenous than in neighboring Priorat or Montsant, resulting in wines that have less vintage variation. With only 6,000 hectares of vineyards scattered around the slopes and valleys of the area, this accessible region is starting to catch on among outside winemakers in search of great terroir; two dozen wineries have joined the pioneering Piñol family in Batea alone over the last two decades, up from just a small handful at the time of their founding.

For the last 22 years the family has been firmly committed to organic farming and preserving Terra Alta’s indigenous grapes such as Morenillo, Garnacha blanca and others. The soils are nourished once every 3 years with cow and sheep manure. Other organic treatments are used yearly to manage humidity threats and worm plagues. The majority of the vines of the Piñol family are dry farmed and head pruned. These older vines have deep root systems allowing for balanced levels of ripeness. Yields are low, normally 12 bunches per vine. Juanjo’s favorite vineyard sites are the ones showing steep slopes in higher hill sides. Terra Alta is where Garnacha Blanca first mutated from Garnacha Tinta over 100 years ago and is home to a third of the world’s total plantings of the grape (and 75% of Spain’s total plantings). Currently Piñol is producing four Garnacha Blanca wines: Raig de Raim, Portal, L’Anima L’Avi Arrufí and the single vineyard flagship L’Avi Arrufí Blanco. In addition to Garnacha Blanca the Piñol family works with Cariñena, Garnacha Tinta, Garnacha Peluda and Morenillo, which is only grown in the Terra Alta region.

The region of Terra Alta is full of small, fractured vineyards that average only 1.5 hectares each. The Piñol estate has around 70 ha (172 acres) total of vineyards, scattered throughout the valley and foothills that make up the region, growing at around 1,200 feet altitude on average. In addition to their estate, they have long-term agreements with farmer neighbors who are practically extended family; they all work together on this additional 25 hectares (61 acres) according to Piñol’s philosophies of sustainability and organic farming.  Piñol’s grapes grow among clusters of Mediterranean herbs like rosemary and thyme, which contribute to the complex aromatics in the final wines.

The winemaking philosophy at Piñol reflects generations of input and collaboration among the family: the present-day winemaking team of Cristina Borrull, Toni Coca, Juanjo Galcera Piñol, with input from Josefina and Juan. White winemaking at Piñol is centered around Garnacha Blanca, with the goal of sharing its different facets and personalities—and the terroir of a single vineyard in the case of L’Avi Arrufí. Because most of the red wines are blends, the winemaking approach can differ based on whether Garnacha or Cariñena is taking center stage; the former tends to be rounder and has a more glycerin profile with silkier fruit, while the latter has higher acidity and more rustic tannins.

Winemaking techniques at Piñol reflect the winery itself: it leans on tradition but embraces modernity. It is clean, spacious, and bright, with stainless steel tanks used for many of the wines’ initial fermentations, an array of barrels from two beloved French coopers, and even a concrete egg that is used for the flagship white wine. The techniques are minimal fuss and have been established over decades as the winery has evolved; for instance, all grapes are gently destemmed, and blends are always harvested and fermented separately, allowing each varietal to be made according to its unique personality. The average yearly output at this small winery is 650,000 bottles, and production is split 50-50 between red and white wines, although the family anticipates increasing white wine production in the coming years.

Celler Piñol produces around 13 different bottlings at their winery, with a mix of white, red, some rose, and even some special dessert wines known as mistela. The Raig de Raim and Portal wines both serve as excellent calling cards to the youthful styles of Terra Alta. The flagship wines of the estate are named after its family members, such as L’Avi Arrufí and Mather Teresina. Finally, Piñol’s fierce dedication to its past and the traditions of Terra Alta are expressed in its bottling called Finca Morenillo, named for an indigenous variety that nearly went extinct because it is low alcohol and low color (similar to Pinot Noir) which set it apart from the other local reds.

The Piñol family helped to revitalize the grape starting in 2005 and have begun planting 4 new hectares of Morenillo using massale selection cuttings from their original site, which is over 75 years old and dwindling in yield. Some other wineries in Terra Alta work with this grape in blends, but the 3000 bottles produced from Piñol’s Morenillo vines reflect the only monovarietal bottling to be found. Celler Piñol has received recognition for many individual wines and has also received special acknowledgement in Jancis Robinson’s Wine Grapes for their stewardship of Morenillo.

The natural conditions of Terra Alta make it an ideal place for a winery to commit to farming sustainably. Its deep soils poor in organic material cause roots to grow deep, making them less in need of irrigation. The winter Cierzo wind—and the occasional snows—help to kill pests and disease, and as the snows slowly melt, they irrigate the vines just before their burst of spring growth. That said, many wineries have yet to commit to farming in such a way; ever the pioneers, Piñol began insisting on organic viticulture all the way back in 2000. They use no chemical pesticides or herbicides in the vineyards, and this commitment toward sustainability continues in the winery, where they only use sulfur at bottling, ending up with an extraordinarily low 25-30ppm of free sulfur in their final product, which is less than half the standard for organic winemaking. The dynamic, textured style of their wines is a testament to the talent of Celler Piñol’s team, and their impeccable raw material. Their commitment to sustainability and preservation of indigenous grape varieties ensures that their legacy is firmly established and will continue for generations to come.